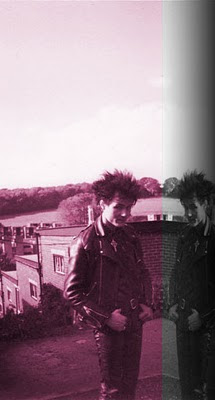 Wanting to look a bit different wasn't just because of the girls.

Once I'd sidled into this subculture I found that there was a lot more in there that was to my liking. There was a certain point of view, an attitude, that I found myself in alignment with. I'm not saying I wanted to Smash the State, far from it (if we descended into anarchy I was hardly going to be assured a regular supply of SF novels and Toyah LPs), but more that I found the different way of looking at things appealing. And the music of course.

Yes, we did think we were different, but I wasn't so obtuse as not to realise that the subcultural vogue was a uniform in itself and that I was not so much refusing to conform as choosing to conform to a different (albeit more minority) mode. A common criticism often leveled at me and my siblings in style, especially by lapsed members of the congregation interestingly, was that we "thought we were something special and better than everyone else".

I don't think I did. Whilst there very probably were those who pranced around, chalking up internal victories every time their unconventional looks raised an eyebrow, it wasn't that at all for me. It wasn't about gangs either - in my experience the only conflict occurred when gangs of Casuals (forerunners of today's Chavs) decided to give a kicking to a lone punk or goth. I was once on the receiving end of such a kicking myself at the age of nineteen; I can only say that I'm glad they were all obsessed with wearing trainers otherwise I might have been in far worse shape afterwards.

No, for me it was to do with what I felt like.

It was the inverse of the Neuro Sartorial Programming I discussed in a recent post here. Instead of allowing my thoughts and attitudes to be moulded by the uniform I wore, I felt I was expressing my thoughts and attitudes through my appearance. I may have been shy and, not to put too fine a point on it, hard work for some people, but I used my appearance to undercut this shyness. Visually I was announcing that even though I might be quiet it didn't mean to say I wanted to hide in a corner. People could get an at-a-glance precis of my personality from how I was dressed; if anything I hoped my appearance might encourage others to talk to me and thereby overcome the single greatest obstacle in my social life - the fact that I had absolutely no idea how to start a conversation.

You'd think that in the 21st century, after all this time, people would now be used to the sight of punks or goths and that it would provoke less hostility. Unfortunately that's not the case. Even today - and I dress fairly ordinarily now in comparison to how I used to - I occasionally am verbally abused from the safety of a moving vehicle. The funny thing is that what with the speed of the car and the doppler effect I never have any idea what these motorised maniacs are shouting.

And the violence continues with such horrifying cases as the murder of Sophie Lancaster.

Sadly the government refused to extend the definition of "hate-crime" to cover such attacks, despite the fact that it is exactly what they are. Acts of unprovoked violence based solely on the victims' appearance and choice of lifestyle.
clothes image journal life look memoir psychology youth