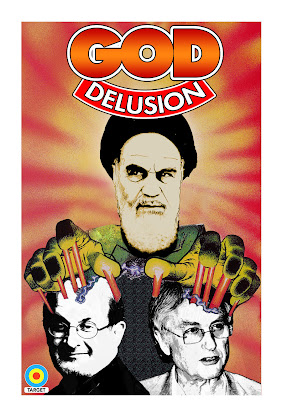 It's very rare that I read a non-fiction book and agree with virtually everything therein. Even popular science books (of the more philosophical type that I read - I'm not for a moment suggesting that I would take issue with the theory of acids and bases) sometimes express opinions or hypotheses that I'm not 100% convinced by.

The God Delusion by Richard Dawkins is different. Reading through it I couldn't find a single fact or well reasoned argument I disagreed with. That's not to say I think it's a fantastic book - it has many flaws, but thinking about them I have come to the conclusion that a lot of them are unavoidable and come about as a direct result of having to deal with the subject matter.

Firstly, the tone can come across at times as rather shrill and overemotional rather than measured and calm. But have you ever accidentally got embroiled in a so called discussion with fundamentalist godbotherers? There are only so many times you can coolheadedly state your case before their inherent refusal to listen to a single word you've been saying starts to grate. Perhaps within the pages of a popular non-fiction bestseller is not the best place to lose one's rag, but Dawkins can hardly be blamed for getting a bit hot under the collar in places.

Parts of the book can also be interpreted as the author being a somewhat full of himself and inordinately proud of his giant intellect, but if anyone's earned the right to blow their own cerebral trumpet it's him. Besides, it's only the Bible that says pride is a sin, so by his own set of rules Dawkins has every right to say fuck it, I'm brilliant. That stuff about the meek inheriting the Earth is probably a lie as well.

Seriously though, there are a couple of other major shortcomings that leapt out at me. The book seems to be both shooting fish in a barrel and (perhaps ironically) preaching to the converted. Are these further flaws that come with the territory? Perhaps they're also a side effect of the fact that it's me reading the book.

As I've said before, whilst I would not call myself an atheist in that I don't quite see the logic in defining myself by what I don't believe in, I am a materialist and do not think you need to postulate a god in order to explain the universe. It's also quite clear from the study of human history that the bulk of religious rules and regulations were invented as a method of controlling people. In the absence of an effective police force or centuries of consistent intellectual growth, the disproportionate threat of hell used to be the only way to prevent someone killing you or nicking your loaf of bread (I'm not sure what the deal was with coveting, though).

Given that the absurdities of religion are already clear to me it's not surprising that I feel that Dawkins has picked an easy target. Look at how illogical they are! he says. He doesn't need to tell me. I already know.

Of course not everyone is already a materialist or an atheist, but unfortunately I don't think The God Delusion is going to have any effect on them. Most modern monotheism rests on a get-out-of-jail-free circular argument, known as Faith, so no matter how convincing or compelling Mr Dawkins's arguments are, they're just not going to cut the mustard.

Cause you gotta have faith.

I am surprised his book hasn't caused more of a stink. Given that it quite clearly and unequivocally states that There Is No God and Religion Is Bunk, it's puzzling that it hasn't attracted the attention of the more hysterical breed of godbotherer. You know, the kind that issue fatwas. And I'm not talking about the new kind of reasonable 21st Century fatwa, I'm talking about the old blood, thunder and ayatollah variety. The kind that Salman Rushdie found himself on the receiving end of.

I haven't read The Satanic Verses myself, but understand that it's a dense intellectual novel, a work of fiction. I'll repeat that; fiction.

The central tenet of Islam is summed up nicely in the Adhan, the call to prayer that can be heard recited by the muezzin from the mosque: La ilaha illallah (There is no God but Allah). So which is more insulting to this religion, a factual book that directly refutes this by claiming There is no God or a work of fiction containing a dream sequence in which a character loosely based upon The Prophet Muhammad is portrayed in a less than favourable light? This aspect of Rushdie's work is, at most, comparable to The Life of Brian which, whilst it may have caused a bit of a controversy in Christian circles at the time, didn't result in the firebombing of any cinemas as far as I am aware.

Just to clarify - I am not discussing the pros and cons of blasphemy versus freedom of speech here. Any regular readers of this blog will know where I stand on that particular topic: Blasphemy (n): libeling the non-existent. I am just trying to get my head around the logic of this apparent disparity of reaction.

It has been suggested that perhaps the fatwa was politically motivated in an attempt to alienate Muslims from the west, so maybe Rushdie was simply in the wrong place at the wrong time. Perhaps the religious powers that be now realise that in treating Dawkins the same way they would be proving his point about the destructiveness of religion.

Or maybe they just got out of the theological bed on the wrong side that morning.

This isn't the only comparison of Hysterical Reaction vs No Reaction that can be made. In 2005 the Jyllands-Posten Muhammad cartoons controversy kicked off. At first sight this is a more clear cut case as the Danish newspaper had contained illustrations of the Prophet Muhammad, an act which is forbidden under Islamic law (again, I'm not debating the pros and cons of this conflict here). And yet only four years previously, the appearance of the Prophet Muhammad in an episode of South Park, Super Best Friends, provoked no reaction whatsoever. What gives?

The only conclusion I can draw is that if you are planning a blasphemy in the not too distant future, you had better hope that religious leaders are having a good day.

No point in praying for this, naturally.

The Death of Doctor Who. As my Dimensionally Transcendental Confession reaches it's ninth episode I lose my virginity during the 1985 hiatus (was the universe trying to tell me something?) and in subsequent years get put off so much by Sylvester McCoy that I stop watching. Oh, and the series is cancelled.