The Man in the Mirror 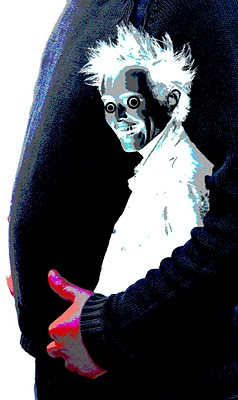 It's probably a bit unexpected that I'm writing a blog entry with the same title as a Michael Jackson song, but in my defence I'd just like to point out that the late Mr Jackson doesn't hold a monopoly on the concept of mirrors, or the male inhabitants thereof.

However, looking in the mirror these days I begin to understand his desire for plastic surgery.

I have always had a curious relationship with mirrors. As a child and early teen I disliked them.  Firstly because they were frightening, especially at night. They reflected and doubled the scary luminous shapes that seemed to make their way into my bedroom no matter how thoroughly I closed the curtains. And what if I had to get up in the night?  In the small hours a mirror was an eerie portal into an unnatural perverse world where I could never be sure that the shape moving in there was only my reflection. And what would happen if I looked into it whilst I was asleep?

Far better to cover it up with a blanket.

Secondly, I didn't like what I saw in there. As a younger child I just didn't like the idea of my reflection, it unnerved me. Once I'd entered my teens I was obsessed with how ugly I looked.  The spots didn't help, and I disliked the way my features seemed to be jostling for position on my face.

However, in my late teens and early twenties I suddenly developed an almost arrogant confidence in my appearance and embellished it.  As stated in another entry, this was partly in an attempt to bypass my natural shyness but that's not to say I wasn't taking pride in my appearance as well.  I mentally froze my internal self image in this form. This was me.

This caused problems as age began to take its toll. At first I was blind to it. Like its cousin the camera, the mirror never lies, but can it be persuaded to bend the truth. If I stood like so and tilted my head at just that angle I still somehow managed to convince myself that I still matched my internal self image even though I was about five stone heavier.

My wake up call came from outside. Firstly someone at the drama class I went to said I "looked Welsh" because I was stocky. Whilst I am 25% Welsh, "stocky" wasn't part of my self-descriptive lexicon. Then in a review of the Gonzo Dog-Do Bar Band (in which I play bass) I was horrified to read the words "The bassist is a hefty, shy-looking bloke". Firstly how could I look shy, but mainly it was the word "hefty". As the Sixth Doctor might have said, "Hefty? Hefty?! HEFTY!?"

I was indignant until I watched a DVD of the same show.  Fuck.  FUCK. I was hefty.  My self image was now totally at odds with what I actually looked like. People must have been laughing at me behind their hands for years.

A concerted dieting effort meant that I dropped three stone in two years and my weight has been yoyo-ing within a stone of that lower weight ever since. It's not enough though.  The Man in the Mirror is still at odds with the Boy in the Head. Whilst I like to think I am pragmatic enough to know that there's nothing that can be done about aging, I'd rather be an older version of who I feel I actually am than some fat, decrepit stranger.  I can't get my youth back, but can I have a better middle age? Maybe this is insanity, certainly it's vanity.

I need to lose more weight.  I'm not a foodie and I want to be thinner far more than I want chocolate. However, it's not as easy as it should be; my feelings on the matter are described quite well by Michael Marshall Smith in his short story Diet Hell

I started doing a little running. I went to the gym. I dropped my beer consumption back down to the level of a normal human being, and then cut it out altogether. I ate healthy food, and not so damned much of it.

The thing is, I did all this apart from a beer here and a beer there, and apart from skipping the run every now and then. Most days, in fact. I mean, running is dumb. Animals only do it when they're frightened, right? And why do you think that is? Because it's no fun at all. I didn't really join a gym either: they're real expensive and full of body Nazis. And shit - what's the point in being alive if you can't have a halfpounder with cheese when you feel like it, and a couple beers to wash it down? I mean, really? And do I have to spend the rest of my life dieting the whole time? Is this a reasonable way to live?

Aside from the stuff about the halfpounder with cheese, those could be my thought processes.  Can't I just reset my metabolism to that of a 21 year old and leave it there?

It seems not. If I want my appearance to more closely match my self image (and I really do - I'm sure I'll feel much happier as a result) I'm going to have to do all that grown up stuff like diet and exercise.

Then if all else fails have plastic surgery.

Next time...
I Was A Teenage Toyah Fan 2: From the Hammersmith Odeon to Capital Radio - the times I got to see her play live and then talk to her at last.