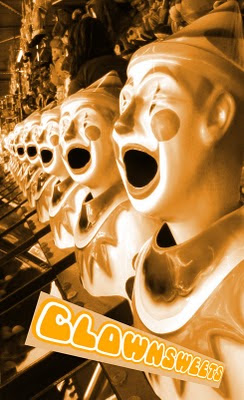 As I've discussed before, there's a very good reason we don't remember our dreams for long.

To reiterate; there are two kinds of memory, long and short term. The long term is our hard disk, the storage of time past, whereas the short term is our working memory space, the RAM in which our consciousness occurs and in which reality seems to take place.  Sometimes a backfiring brain will temporarily mistake the latter for the former and misidentify what's happening right now as a memory of the past, hence deja vu.  Sometimes this feels more like the memory of a dream, a clue to its origins.

Occasionally a dream is surprisingly persistent. Over the years I've had a number of these; recounted here are just four of them. What it was about these that meant they persisted I have no idea; perhaps it's nothing about the dreams themselves, but more the chemical composition of the hormones sloshing around in my brain on that day.

A very recent one this. Part of a longer more "epic" dream in which I was taking part in a reality TV show, this persistent nugget consisted of me researching an eccentric sixties and seventies pop star who had a novelty hit called Flesh-Eating Skeleton in the early seventies under the name of Skelly. He appeared on Top of the Pops singing this whilst wearing in a velvet skeleton suit (no doubt Pan's People were dancing in the background wearing skull masks).  In the dream I was searching in vain for a clip of this on YouTube.

Experienced about five years ago, this memorable sequence has stuck with me ever since. Again it was part of a longer dream, but its host story has long since been lost. It started in a classroom; Jonathan Ross came in to tell his children that due to an air strike they'd be unable to fly off to France for their holidays as planned. Rob Brydon walked in and said casually "Whereas I, who am taking my children to Norway, can leave now." His children stood up and followed him out of the room.

A stage in front of  crowd at some political event in Europe. Rob Brydon was now Steve Coogan who was playing a European politician from an unspecified mediterranean country. A dais slid forward on the stage atop which Coogan stood, hands raised in victory Vs, nodding and smiling at the crowd.  His moment of triumph was spoilt by another  politician emerging on a dais much taller than Coogan's.

At this point music struck up, heavily percussive.

Coogan forgot his argument with the other politician and started doing a demented dance to this music, facing the crowd. He's not seriously dancing, I thought, he's trying to make them laugh.

He heard me and declaimed loudly "I'm not a cunt!"  Odd as he wasn't the sort of person to normally swear at all.

That was it for the dream, but whenever I saw him again after that in real life, the first thing to go through my head would always be the plaintive cry I'm not a cunt!

I was probably five or even younger when I had this dream.  Back then there wasn't nearly as much TV for children to watch so what little there was tended to stick with you. This included public information and road safety films, which were often more than a little sinister. So persistent was this meme I even had a dream about an imaginary road safety film.

A little girl was leaving a sweetshop with her mother having just bought her a packet of orange boiled sweets - a square tube of them (rather like Tunes or Spangles). So pleased was she with her new possession that she entered a reverie based on the advert for these sweets, in which a pair of clowns in orange costumes started balancing a complex pile of packets of these sweets on her shoulders as she held a cane over her head.

So wrapped up was she in this fantasy that she stepped thoughtlessly into the road and a car had to slam on it's brakes. Everything went into slow motion at this point - the little girl angrily attacking the front of the car with a large inflatable clown that she happened to have been carrying but which had been invisible up until this point.

I've no idea why these dreams have stayed in my head so long. Maybe they'll stay in yours too.

But probably not.
dreams journal memory