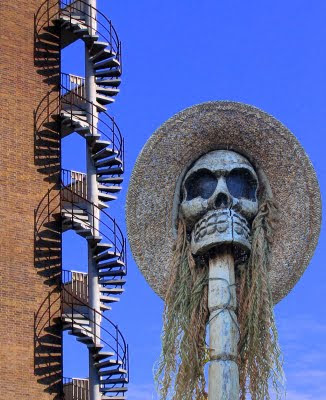 Increasingly these days I find myself waking up in the night and worrying about death. Worry is far too mild a word for it. Blind panic would be more appropriate.

Logically of course I know there is nothing that can be done to escape it. Intellectually I can be certain that the idea of an afterlife was only made up, initially to stop people going insane with fear and spending all their time in a blue funk instead of getting on with whatever it was they needed to do in order to be a valuable member of society and perpetuate the species. After a while the concept was adapted in order to control people and make them obey out of a fear of the quality of the place they would be allocated after shuffling off this mortal coil.

It's the arrow of time of course and the fact that to all intents and purposes we appear to be moving inexorably into the future. Accelerating even. Perhaps the world before the womb would be scary if I knew it lay ahead of me?

My fear makes sense. Fear of mortality is a magnificent advantage and can only be a good thing in the primitive hunter-gatherer world. The one who was the most afraid of death was the one who was the most cautious and therefore was the one who survived to have children who inherited this fear. Simple evolution means that the fearless have long since died out and as a result of the pure mathematics of the situation we are a race of beings running scared from our own skeletons. It's the dark secret of our success.

Fear is a marvellous evolutionary agent. Eventually in their own dim way people started to realise this, if only unconsciously. They built up an artificial set of rules and regulations around it. They called this rule-set "religion" and subverted the by now quite natural fear of death in order to control people. Don't steal that loaf of bread otherwise after death - which you are frightened of anyway - an even more frightening fate awaits you. Eternity in the company of Beelzebub and all his hellish instruments of torture.

In this way the religious leaders unwittingly bent the engines of evolution and in extreme cases even started imposing imposed artificial evolution upon the species. Believe what we say you should otherwise we will kill you slowly on the rack.

But whilst fear of death might drive evolution, how does one explain death itself? How does that get selected for?

Defenders of the status quo, those who say that all things must die to make way for future generations, imply heavily that the death of the individual is good for the species as a whole. Whilst this may be the case - because without reproduction there would be no evolution and therefore no improvement - I can't see how dying could possibly be selected for in the evolutionary process. It stands to reason that any reproduction that happens has to be before death, therefore how likely a person is to die after that can have no appreciable effect on the survival of the species (although it would help if the parent survives long enough for the child to at least begin to fend for itself).

I suspect that the truth is that death occurs simply because life is a monstrously inefficient process and that machines this clunky will always break down sooner rather than later. Without help, DNA replication always results in frayed genes, and frayed genes mean that we macroscopic organisms will very probably die before we even get the chance to reproduce. And this is where evolution comes into play.

Telomeres are sequences of junk DNA at the end of a chromosome which prevent it from fraying and make sure that the precious sequences containing actual data are protected from damage as long as the telomeres last. Because with each replication they themselves disintegrate further and eventually run out, whereupon the damage moves onto the important genes and we begin to wither and die as mistakes are made.

Evolution had to guarantee that the telomeres were long enough to get the DNA's macroscopic host organisms (us) reproducing. So in fact evolution has been fighting death all along, making sure that we survive as long as necessary. Death isn't actually there by design - we are simply made as well as evolution could make us. But not to last.

As I have discussed before, I am sure there are ways around this.

Sulci Collective said…
I agree with your analysis of DNA coding for its own obsolescence. But also after we have passed the age of useful reproduction, we become a drain on resources, still requiring food etc, which may be scarce for the tribe as a whole.

I still demand to know quite what it is about the fact of our demise, the great switch off of our consciousness that so troubles me. The loss of hard earned memories and experiences just feedbacks into my time gathering them and asks a great big 'what's the bloody point'? Yeah, blue funk every day, like most kept at bay somehow, but elbowing its way to the forefront for at least a couple of minutes.