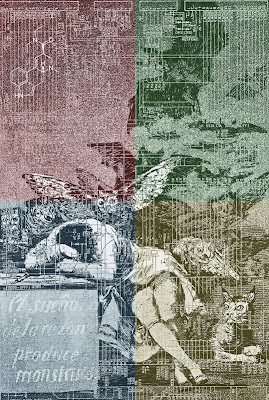 There's nothing quite as interesting as one's own dreams but the downside of this is that there's nothing potentially as boring as other people's. However one interesting thing about anyone's dreams is that if they write them up before falling asleep they may find that this captures details which they then completely forget. The next time they awake from consciousness they won't remember them. At all.

This may be to do with the way consciousness divides up time between the long and short term memory. I suspect that the short-term memory consists of "today" or in other words the amount of time since the last sleeping. This is how we distinguish today from yesterday. Today is now, we are conscious and living on our wits; memory of things that happened earlier that day feel very different from the memories of things that happened the day before, even though the difference in time between them is negligible. The important thing is that they happened in this bit of life between two instances of non-self.

But the short term memory is volatile. Go to sleep and it gets wiped in preparation for the next bit.

I noticed this recently when reading over a dream I had written down on my Tumblr mini-blog. Whilst I remembered some things like the "huge ham-like hands" or the "beatific smile" other stuff like the "train carriage that refused to run over the squirrel" was as new to me. I didn't remember it and I couldn't picture it.

So how come we can remember the events of the day itself but not the details of the dreams preceding that day? It's clear why - dreams are side effects of memory processing - but how does this work?  Either the dreams themselves are flagged with a "don't bother filing this into long term memory" bit or the events of the day are flagged with a "file this tonight" bit. Which is more likely? Given that sometimes we do remember dreams for years I suspect it's not so much that these dreams fail to be flagged "do not file" but that they are so memorable or reach a threshold of emotional resonance that automatically triggers the "file this tonight" bit.

This means that there may be more than two kinds of memory, there may be three - long-term, short-term (disposable) and short term (permanent). Whilst the latter two are indistinguishable to the working brain during the course of the day, only the permanent short term memories are converted into long term overnight (generating dreams in the process, dreams which, if we remember them at all, end up as disposable short-term memories with a four-hour half life).

I do wonder though if when you pull an all-nighter the brain attempts to start filing the memories of the previous day anyway - halfway through Morning 2 during one of these abnormal stretches of time the events of the previous day do indeed seem like events of the previous day, i.e. as if they have already been transferred into long term memory even if only on a rough and ready basis. Whether the temporary short term memories have disappeared by this point I have no idea; what would be useful would be to perform an experiment whereby I (a) record the psuedo-events of a dreeam in detail (b) pull an all nighter and then (c) read back through the events over 24 hours later to see whether I can recall them or not or whether some have already been utterly forgotten.

Just as the sleep of reason produces monsters, being deprived of sleep for long enough produces hallucinations, which can be quite monstrous enough in their own right. This must mean that even though there might be some crude filing going on whilst awake eventually the brain can't cope and starts filing stuff in earnest and we start actually dreaming whilst awake.

These sleep-deprivation induced hallucinations are amongst the most convincing and high definition hallucinations I have ever experienced. And it is remarkable that they are induced merely by getting the brain to do something slightly different - no foreign chemicals have been introduced; this is your mind doing something it's perfectly capable of doing anyway.  Then again a hallucinogen such as LSD is merely a trigger - the chemical itself has no toxic effect as it's present in such low concentrations in recreational doses. All the molecules of lysergic acide diethyl-amide do is fit into molecular keyholes within chemical structures already present in the brain and activate something that perhaps is normally only activated during unconsciousness.

The imagination, the dreaming.

Remember when you were a child and some of the games you played were so real that you could almost see the fantasy worlds you were inhabiting? Time passes so much more slowly as a child and there is so much more to experience. So many more new memories to assimilate and pass from the short term to the long term. Perhaps this is why these involving children's games felt so real.

Kit said…
Interesting.Iagree in part. I dream always, and vividly. At times I go back to sleep as my dre.. ams are so interestng. I find this odd. No?