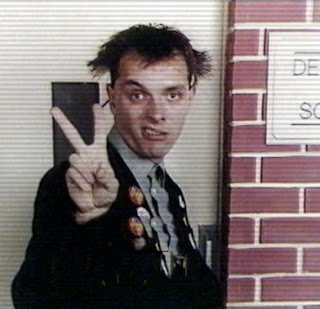 In the aftermath of the unrest of the summer of 2011 one might be forgiven for thinking that civilisation is collapsing around our ears and that we are facing the end of days. Except that this kind of doomsaying itself is nothing new and has existed for as long as mankind has been keeping records of it. An excellent article in The Economist put it far better than I could and suggested that perhaps Grand Theft Auto is no more responsible for the moral decline in today's youth than Chaplin's early silents were for the Great Depression.

If anything such invective merely demonstrates that if one thing is inevitable it's aging. The old will always disparage the young because they are angry about getting old. The answer to "are you getting old or is it crap?" is invariably "You're getting old".

I work at the same educational establishment where years ago I studied for a degree. Back then things seemed so much simpler, so much more black and white. We successfully conducted a campaign to ban the sale of The Sun from the campus newsagent mainly because of Page Three and its offensiveness to women.

In cynical retrospect I suspect that many of the spotty young men who got involved with this (myself included) may have had ulterior motives.  In allying themselves with such a feminist cause they no doubt hoped to gain enough brownie points with the women that they might stand a chance of seeing some real breasts...  Nevertheless it was a start. Whatever their original motives, involvement in such campaigns might mean that some political thought might rub off on such young men. In the end might they not become better people for it? It is not for nothing that ones student years are often synonymous with political activism.

Fast forward to the present day as an employee of said establishment when during Freshers' Week I get cornered by an angry student complaining that I was "infringing his rights" by not permitting him to view pornography sites on the PCs in the computer labs.

This is the difference between then and now. No longer what can I do for my politics?, but instead what can my politics do for me?  The association of activism with students has remained but the focus of such activism has moved from the world to the self.

I hope that this is a temporary measure. Just like those schoolboys who hoped campaigning with feminists might get them a girlfriend, I would like to think that exposure to the mechanisms of activism will eventually convince members of the Open Access Porn movement that there are other more worthy  causes to champion, that politics doesn't always have to be about the self.
Some people never make the leap from selfish to selfless politics and even go on to make a career in it, but this is nothing new either. This egocentricity is perfectly demonstrated by the current government - personal selfishness writ large. The Tories are not an evil empire with a grand plan - that would imply too many organisational skills on their part and people are far too inefficient for that. They're just selfish and such draconian measures they implement are symptomatic of this.

The only reason they get away with it is that people buy into the illusion of power. The idea that the government is in control and has an overarching plan is about as plausible as any other conspiracy theory. There is no conspiracy, just a bunch of very unpleasant people in control whose opinions are amplified by the people accepting the structure of the status quo and believing the falsehood that if they've got into power they must ipso facto know what they are doing.

They don't know what they're doing.

They must be stopped.