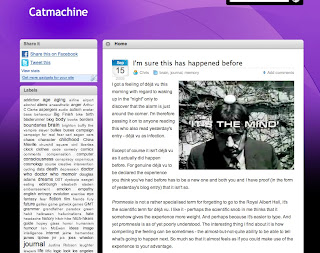 However in this case it actually has. I did indeed write about déjà vu back in September 2009. I'm not intending to go over the same ground here, but recently woke from a dream with some new insights into what might make this bizarre sensation, this mental feedback, tick.

In the original blog entry I hypothesised that déjà vu was caused by the short term memory (in other words the current experience, the present, the now) being misidentified as long term memory. This does make some kind of sense. However doesn't explain one of the stronger sensations that can be experienced during a promnesiac episode. Often my experience of déjà vu is not so much I'm sure this has happened before but rather I am sure that I have dreamed this before. This makes me inclined to think that déjà vu may be the activation of a system that is usually only intended for use during unconsciousness.

In waking life the short and long term memory have quite clear and separate purposes. The long term is your backstory, who you are, what you're doing here and how you got there. It sits on the organic equivalent of a hard disk, immutable and unchanging from day to day, at least in theory. The short term is the working space of the consciousness, the RAM, the now. You can see how the latter of these two memory types might work just as well when dreaming, but perhaps not the former...

When do dreams actually begin? If you think about it, they don't. There isn't a moment when you settle down in the cinema seat of the Cartesian Night Cinema, hand in a bucket of warm popcorn, the lights dim and the words Our Feature Presentation appear on the screen. Dreams sneak up on you when you're not looking, climb inside your head and attempt to convince you that you were embroiled in this story all along, that the reason it seems a bit incoherent is that you simply weren't concentrating. If you start wondering about this kind of thing too much during a dream you might find yourself having to run away from a monster or trying to explain to everyone on a crowded bus why you don't have any underpants or trousers on.

Any period of awareness that doesn't begin in bed is a very bad thing. In prehistory it would very probably mean that you'd been knocked unconscious by a predator and so feelings of panic and terror would be useful for removing oneself from danger. In the modern world the panic and terror remains even if the blackout is caused by over-drinking. So in order to prevent every dream starting out as a nightmare the brain has to fool you into thinking you were there all along. A large chunk of false short-term memory would do the trick nicely. There was a bit before, even if you can't quite remember what it was now.

Of course this isn't the only way that the dreaming brain has to pull to wool over your sleeping eyes. In order for dreams to make sense your imagined past quite often has to be very different from reality. So a false long-term memory also has to be constructed, one which, provided you don't examine it too closely, will serve to shore up the imaginary present you think you're living through. It's a common occurrence in dreams that you suddenly remember things that of course always were the case, only you'd forgotten. That the Queen used to live next door to you. That you could fly when you put your mind to it. That you could sometimes travel back in time. That you used to be a character in Eastenders. And so on.

This false long-term memory can't be a coherent structure as this would imply that a brand new one would have to be pieced together for every dream, which would in turn have to be scripted in advance. This clearly isn't the case. The false long-term memory must therefore consist simply of a mechanism which, when queried, always replies "Yes, that's right, that's what happened" in order to support whatever absurdity the dreaming brain is currently entertaining as reality.

So if this false long-term memory is accidentally activated during wakefulness and applied to whatever you are currently experiencing you might think it had happened before.

Or perhaps, if the scent of a dream lingers around the response from this mechanism, that you'd dreamed it before.
brain deja vu journal memory