January 16, 2012
Ever since moving to this city I've had a Grudging-Acceptance / Hate relationship with the local buses as anyone who has ever read my blog or followed me on Twitter or other social media will already know. I never shut up about it and am in fact surprised you're still following me. What's that you say? You're not? Oh dear. 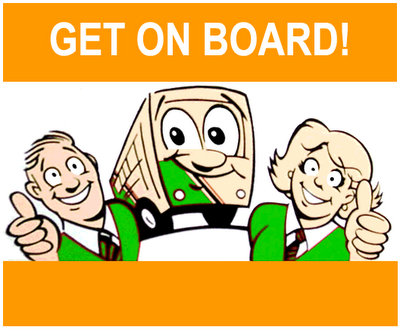 There are many reasons for this (the bus thing, not the social media thing). For a start there was the whole breaking my arm and lying about it incident which I've already chronicled in this very blog, and then there was the time that The Worst Thing That Has Ever Happened occurred on the top deck of a number 25. But on the whole these specific events aren't a major part of the general unpleasantness surrounding such journeys.

But do they do that? Do they buggery. They just stare with a slow-witted bovine lack of interest as I careen up to the stop cursing as the cloud of exhaust from the departing bus billows into my face.

"Thank you," I sometimes say to them with a pointed sarcasm, "Thank you very much!" This statement met with looks of blank incomprehension.

Eventually of course I do manage to catch a bus. Sometimes I already have a pass in which case no problem, but on other occasions I've got to buy one from the driver. To be fair some drivers are OK with this but for others you'd think being given a £10 note for a £4 fare was the most terrible transaction that they'd ever been forced to take part in. They sigh, they roll their eyes, they make a point of writhing uncomfortably about in their seats just to demonstrate how difficult extracting a fiver from their top pocket is. Once or twice I've been told they don't have the change and I've had to get off again. Pull the other one. With fares that high they should expect £10 notes to be common currency.

But once on the bus you have to contend the other passengers.

It's not unusual for people to prefer to sit on their own if there is room, it makes psychological sense. I have actually covered this before in another blog entry but I think it's worth repeating here. We probably all remember the young Ben Elton's famous routine about double-seat on the train, "You don't want some bastard sitting next to you, do you?" This is true of course, and probably one of the reasons that so many of us remember the routine; it resonated. Given a choice I'm sure all of us would prefer to be left alone with our book or Kindle in the mornings without some stranger intruding upon our personal space and farting. But sometimes this is unavoidable - in the rush hour, seats are at a premium. But of course this doesn't stop some people trying to keep their double seat to themselves.

They put their rucksack (it's usually a rucksack) on the seat next to them before spreading themselves out, tree trunk-like legs splayed wide open. They have a copy of the day's Metro in one chunky mitt, having managed to cunningly fold it open to the sports page with just one hand. They won't even look at you when you ask to sit down, although an expression of utter contempt flickers across their face as you do so; how in the world could you have been so utterly selfish and annoying as to have wanted to sit down? they seem to be thinking. Even if you do manage to insinuate yourself into the space next to them they try and take up at least one and a half seats, refusing to fold themselves up even a bit. What's even worse is when one of them decides to sit in the empty seat next to you. Through a process of pure physical intimidation they overflow into your seat, lumpen elbows digging into you, legs automatically splaying open.

What I find impossible to understand is how they can maintain this inconsiderate facade even in the face of a crowd of other people so obviously in need of a seat.

A few years ago I was unlucky enough to encounter Maximus Lummox, the God of this behaviour. For a period of about a month I used to see him on the upper deck on the way to work. He was unnecessarily large; not fat, just built to the wrong scale. He wore a permanent expression of sleepy arrogance on his dull features, half closed eyes peering superciliously out at the world from behind a shaggy curtain of badly cut dark brown hair. He used to sit sideways across two seats, legs blocking the aisle and to add insult to injury used to hook one elbow over the back of the seats thus even invading the space of whoever was unfortunate enough to be sitting behind him. When people were brave enough to ask him if they could use one of the seats he was taking up he looked slowly up and regarded them with an expression of dull uncomprehending hatred. More often than not he didn't move an inch.

On the other hand it is annoying when someone sits next to you even when there are plenty of free seats - obviously too lazy to walk an extra couple of metres to the spaces near the back. However, you rise above this. You are not a disciple of Maximus Lummox. Given your magnanimity it does then seem rather ill mannered of them to move to another double seat in front of you as soon as it becomes available. What, do I smell or something? you wonder sarcastically.

Thankfully most of the journeys I partake of are shorter than forty-five minutes. No matter how much double seat hogging, raucous cackling or pungent flatus I have been subjected to, I can always escape when it's time to get off.

Sitting upstairs as I often do, I remain blissfully ignorant of what is happening on the lower deck, by the exit. Unlike London buses, most of the fleet here are only blessed with one door. Unfortunately a lot of people seem to prefer to stand right in front of it in preference to sitting on the seats available further back. As I squeeze pass with an "excuse me please" I am subjected to a barrage of tuts, sighs and rolling of eyes. By the time I actually reach the exit the people on the pavement have already started piling on, leading to further disdain being heaped upon my shoulders as I have to push past them as well.

But what can you do?

I don't have a car, and whilst cycling is greener and at least keeps me fit, having to deal with car drivers, pedestrians and other cyclists is at least as infuriating as catching the bus. The train stations are at least 20 minutes walk away, but I am to stand the remotest chance of retaining my sanity whilst I still have to commute I am going to have to let the train take the strain.

Or I could just chill out.

I imagine I will probably start ranting on about trains in the not too distant future, then...
anger buses journal people