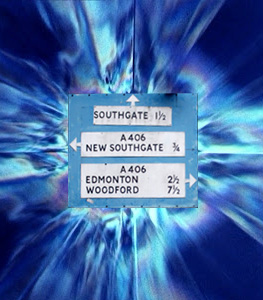 We are told that time and space are merely aspects of the same thing, just narrow ways of looking at space-time, a four-dimensional continuum. And this makes sense and is all very well. The only problem is that you can't move to another moment in time in the same way that you can to another position in space. It's not as if you can hop on a bus to last week.

However sometimes  movement in space can simulate aspects of time travel. As long as you have somewhere to go that you haven't visited in years. Last month I went to Muswell Hill for the first time in around twenty years. This north London suburb was where I spent a large segment of my youth so in many ways stepping off the bus onto the Broadway was like stepping from the TARDIS.

Of course it helped that it was a dark evening and that I couldn't see quite how much things had changed.  There was just as much of the familiar shape of the landscape present to fool me into thinking I was back in the nineties or earlier, provided I ignored the lights of the vast towers of twenty-first century Central London on the horizon. Old London had been much more self restrained, with none of the science fiction aspirations of the modern city.

However, awareness of some of the changes that had taken place in the intervening years was unavoidable. The very act of noticing these changes started tweaking the time travel sensations of my visit so that it began to feel not as if I was in the past but in a dream.

One of the places that it is always possible to time travel is in dreams. The places we grow up have a tendency to hang around longer in the sleepscape and yet even there they begin to change, not as a result of corporate redevelopment but due to some strange mental renovation, they warp and twist until, whilst still recognisable, they become quite distinctive places in their own right, places which remain consistent from dream to dream.

But dreams are unreliable vehicles. If you really want to time travel the best means of conveyance remains the car (or public transport). It was while riding in the back of someone's car a couple of months ago that I realised there was a road that led back through my young adulthood to adolescence and childhood, different sections of which belonged to different eras.

This was the North Circular Road or - as I would later come to know it - the A406.

Looked at in itself it is an unremarkable and in places downright ugly twenty-five mile stretch of tarmac, but it's the associations that are important. It stretches right back to when my family returned to London (when I was three years old) and continues all the way into my early thirties. Even though in places the improvement works and redevelopments have made it unrecognisable, enough of the original structure remains to make many parts of the journey from Hanger Lane to the Crooked Billet all hauntingly familiar, with old memories, good and bad, bubbling up at unexpected moments.

Part of the familiarity stems from the aforementioned return to London and the visits to my grandparents in the Gloucestershire that used to occur at the time. These interminable (to a child) journeys would always start with a long section of A406 as the car built up speed orbiting London until reaching escape velocity at Hanger Lane and slingshotting out along Western Avenue towards Oxford. That arc of the A406 is the most familiar, the landmarks along the way laid down in my plastic child's brain at the same time as much of language and behaviour.

The initial subsection of that journey that was the most well known of all as we also travelled along it on an almost weekly basis on the way into Central London. A short stretch of The Great North Road took us past an evil building squatting at the centre of a field - at the time I was told it was the Latymer School but looking at it now on Google Earth it's clearly just a sports pavilion.

There was something about the horizontality of the windows and the way the roof overhung the building's face that convinced me it had bad things in mind.

This stretch of the road was always over quickly - even for a child - and then we got to the Great Cambridge Junction. Nowadays it's been superseded by an underpass but back then it was a huge roundabout and what stood out for me was the petrol station on one corner with a vertical sign spelling out its name (and now I can't remember whether it was Esso, Shell or something else) in neon letters set against square white panels like giant Scrabble tiles. This was also the point at which - if you knew where and when to look - you could see the Post Office Tower poking up about the infinite terraced houses which lined the North Circular at this point.

That was one of the weird things. A lot of this major trunk road was residential. I couldn't imagine what it must be like to open your front door onto that vast river of tarmac, juggernaut backwash buffeting your face with exhaust fumes and grit every few seconds.

Eventually (in modern terms after only five years but as a child it felt like forever) we moved westwards to East Finchley. Even though it didn't feel like it, this too was in close proximity to the A406 - at the other end of East End Road it lay like a canyon separating East Finchley from all of the other Finchleys. The safest way to cross was via the Northern Line. The journey to the grandparents remained more or less the same, just starting at a point slightly further along.

East Finchley also boasted the Great North Road or Falloden Way which approached the A406 from the south and then merged with it for five hundred meters in eight lanes of polluted tarmac which when I now look back I always imagine being viewed through a reddish grey haze. This was often where the traffic would grind to a standstill and I'd stare out the window at the central reservation. There, amongst the gravel, fag packets and sun bleached coke cans you would occasionally see other treasures - screws, mysterious fragments of machinery or pieces of shattered numberplate. Part of me wanted to get out and rescue this detritus, another part always wondered whether anyone else had ever looked at them and indeed whether I would ever see them again in my life. I imagined these inaccessible islands of tarmac and kerbstone sitting there timeless and changeless. They probably predated my birth and might very well outlive me...