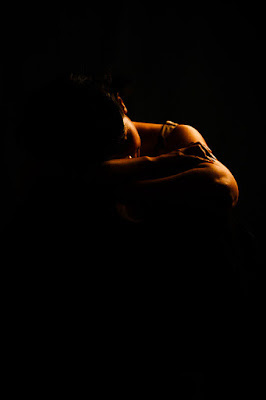 Everyone has experienced The Confusion.

We all know what it's like. We're on our way home from work after a long day. It's later than it should be. We're sitting on the top deck of an overlit bus. Outside it's dark and it's pissing with rain, the hateful hiss of tyres on wet tarmac a cosmic background radiation to our fatigue.

Red traffic lights shout their noiseless commands into the chaotic evening, fragmented into violent splatters by the rain drops on the window. Sleep drags at the back of our eyeballs and we close our eyes, leaning our head against the glass. But the vibration of the engine makes dropping off impossible, our skull reverberating from hundreds of tiny impacts.

The traffic is moving so slowly it would probably be quicker to get off and walk, but there's the rain to contend with so we stay on board until the last possible moment.  It's only a short walk from the bus stop to our flat but even that's more than enough time to get soaked through.

Once inside we turn on the heating and hang our damp clothes on the radiator. We're still knackered and the idea of lying down for a few minutes appeals. After all, we've already got undressed. Just half an hour and then we'll get up and start preparing some food...

The bed is far more comfortable than it normal is and the darkness soothes as it washes over our forehead.

There is a noise. There is a bell. Something is ringing. The Confusion is wrapped around us like a sticky shroud. Is that the alarm? Is it time to get up for work? The numerals on the digital clock don't make any sense... looks like we've overslept. As we fight our way free of the uncertainty all becomes clear.

We've been lying down for about twenty minutes. And that noise? The phone you idiot.

We get up and answer it. The voice of our friend on the other end does much to ground us in reality, but all the same a slight uneasiness remains. On the one hand it's as if we've been granted some extra time - the belief that it was morning and time to get up was strong and now we have the whole evening ahead of us. On the other... there was a fracture. The part of our brain that counts the hours has been fooled, it seems that time is not as consistent as we might otherwise have believed. And all it took to pull aside the curtain was sleep.

Maybe time is a function of consciousness? Without the ordered march of our thoughts across the singularity where the "self" intersects with the "now", it appears that time is not so linear after all, not as central a part of the mechanism of the universe as we thought. Perhaps it is just a way of looking at the universe, an emergent property of the way our brains organise information.

Some theories of the nature of consciousness are pertinent here. As has been covered before in this blog, the brain flips causality and reverses time upon doing something so as to give us the illusion that we're in control, to fool us into thinking we made the decision rather than the decision making us. However this theory assumes that linear time is a constant and that subsequently we're living in a series of tiny loops awkwardly sewn together and struggling against a constant temporal current.

But if Time is simply part of the Whole Sort Of General Mish-Mash then perhaps the brain is using it in a non-linear manner (just as a computer can store the data of a single file on a hard disk in multiple fragments, using up the free space as and where available) and on a very minor level can access it non-sequentially. Even though the very word "sequential" means nothing under the circumstances.

If Time is as much of an emergent property of the brain as Consciousness then perhaps they are in cahoots. Sleep is the great liberator, it frees us from both of them allowing whatever it actually is that passes for our "selves" to simply be rather than adhere to the rigid structures we've built up to understand the universe.

And perhaps they don't like that. Control can be very addictive. And thus Time and Consciousness conspire to prevent our escape, the result of which is Insomnia.

Insomnia is the reverse of The Confusion described above. Instead of compressing vast chunks of unconscious time into what turns out to have only been twenty minutes, Insomnia wants to make sure we're aware of every single dull second.

After a while it occurs that we've been awake for a very long time. We're almost loathe to check the clock - wanting to avoid the bad news - but eventually give in. Fuck. It's 3am. We've been lying here staring into the night for over two hundred minutes. And we had to live through every moment, our brains whirring, going over and over those things we'd rather not think about, telling us all about what we should have done rather than what we actually ended up doing. Reminding us that one day we are going to die. Reminding us that one day we will be lying there with less than twenty four hours to go before we cease to be and that there is nothing we can do about it.

Time and Consciousness are not simply our jailers; they want us to suffer as well. However, dreaming is the point of sleep, essential for the continued healthy function of the brain. No matter how much Time and Consciousness hate us, they can't afford to let us go mad. So - while still making sure we are chained to the awareness of the passing of time and our presence in the increasingly uncomfortable bed - the permit us to start dreaming in parallel.

These dreams are at best dissatisfying and at worst nightmares. We're fully alert to the fact that we are lying there awake and increasingly upset but at the same time these confusing little narratives run underneath the experience. We can't concentrate on them enough to enjoy them, but at the same time they nag at us, adding an additional layer of discomfort to the already intolerable experience of a night's Insomnia.

Eventually we give up and abandon the idea as getting up and facing the day is marginally less unpleasant than continuing to lie there. After all, it's already getting light.

And we get to do it all over again the following night.