Who said you were in your body anyway? 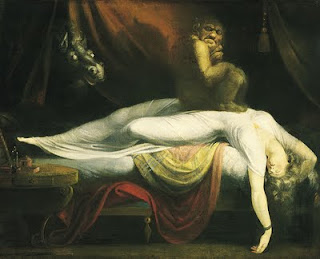 As a child I discovered that the only ways to beat the Evil V were either to fiddle with the curtains until they were entirely shut or to simply open them. Sometimes this was more difficult than it sounds.

I well remember one occasion - I was still in a bunk bed so must have been pre-eight - when I awoke early in the morning and opened my eyes to see the Evil V hanging there looking at me. I had to get out of bed, go over to the window and open the curtains. I scrambled down to the foot of the bed and reached for the curtains only to awake to find myself still lying motionless back in the bed, eyes barely open; but open enough to still see the Evil V hovering, smirking.

This went on for a while. I would seemingly get up and reach for the curtain only to discover that I hadn't moved; furthermore that I couldn't move. Once I actually managed to open the curtains, although the fact that I did so by playing a fanfare on a trumpet was a bit of a giveaway that it was merely another dream from which I inevitably surfaced to the horror of cataleptic wakefulness in a room presided over by the Evil V.

Obviously I snapped out of it eventually (otherwise I'd still be there in the back bedroom of 245 Galliard Road), but this paralysis upon awakening is something that I've experienced intermittently ever since.

It turns out it's not that uncommon, and is fairly easy to explain. When we dream we're usually engaged in all manner of activities - for instance as I mentioned a few entries ago, riding a galloping horse along Marine Parade - and it would be inconvenient if not downright dangerous if we were to act them all out. So, for the duration of the dream, the brain switches off the body so as to be allowed to dream in peace. Sometimes the switch gets stuck in the off position and we begin to wake up only to discover that we can't physically move.

This paralysis would be enough to put the shits up anyone and has been associated with the presence of supernatural beings in folklore. The spookiness is not helped by the fact that often in this state the Question Machine is still running at a low threshold meaning that the sensory information we receive from the real world is still being interpreted in a dreamlike manner. Is that a dressing gown on the back of the door? No, it's the Grim Reaper.

In my mid-to-late-teens I started reading about Out-Of-Body-Experiences and other related Weird Shit and so began to interpret sleep paralysis in these terms. Now I was no longer afraid when I woke in this state, I saw it as an opportunity to see if I could leave the body whilst still alive, to lend out the ghost as it were. Sometimes it appeared to work, but on most of those occasions there was enough vagueness about the experience to allow the sceptical side of myself to interpret it as Only A Dream.

Nowadays, thinking of it again in purely materialistic terms, I can see how it might work. The sense of oneself residing "behind the eyes" is purely arbitrary and probably related to our visually oriented culture. I would be interested to hear where blind people imagine they "are".

Hardcore materialists maintain that our awareness is an illusion and there is no seat of consciousness (standing room only in the Cartesian Theatre!); nevertheless it is a very convincing illusion. It may not follow that I Think Therefore I Am but at least they have to conceded that I Think Therefore I Think I Am. And if it is an illusion, then there's no reason the parameters of that illusion can't be changed. Given enough information about our environment surely we can imagine our "selves" located anywhere in it - behind our eyes, in the palm of our right hand or even ten foot above our own heads.

So in this half-dreaming state of paralysis it's not unreasonable that we might be able to start shifting the imaginary seat of consciousness. After all if we're sending signals to move the arm and it's refusing to do so, the low-threshold Question Machine might interpret the situation as: Did I manage to move my arm? Yes. Is my arm still lying where it was? Yes. Therefore I must have moved my arm out of my arm.

Once the idea of moving without moving has taken hold it becomes easier to slip out of the body all together. We're still lying there - and even though I am approaching this from a sceptical point of view I am still sure that there are ways we can sense our environment that we as yet know nothing about - but have moved the focus of "ourselves" away from the physical location of the body. It is odd the way that we still seem to have a phantom body in this situation, but this may just be the mental representation of the body used in dreams, the unhooking of which from the real body causes the catalepsy in the first place.

The further away from the body we move, the more dreamlike the surroundings become - information about the environment is becoming sketchy as we move away from our sensory organs and so the low-threshold Question Machine is having to make more and more of it up. Just as Alice discovered when she slipped through the looking glass, the parts she couldn't see from our side of the mirror were very different from their real-world counterparts. 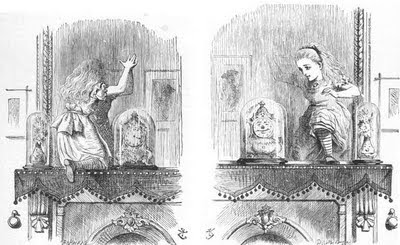 By the time we're in the next room - if we're lucky by having passed through the wall - we're effectively dreaming again. The locus of self has moved so far away from any reliable information available that it's looking at red noise again. Most of us just fall asleep again at this point - once out of the body it's so tempting to fly around all over the place (I often head straight for outer space) that most of us do, and thereby lose any illusion of maintaining the waking consciousness.

There are a couple of aspects of this phenomenon I still can't explain. Firstly, why is the sense of touch of the phantom body so realistic? Far more so than the tactile sense in ordinary dreams.

And secondly, one Sunday morning in North London how did I manage to visit my sister whilst she was staying at a friend's house in Ramsgate?
brain dreams journal mind psychology sleep