The Self Event Horizon 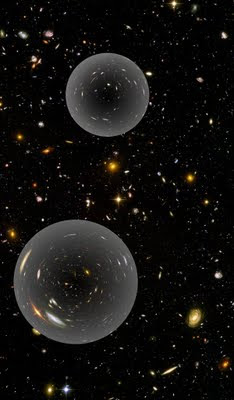 Previously in this blog...

I started out discussing borders and ended up defining the shape of our selves in spacetime, four-dimensional mirrorballs cascading through the white water of the time axis.

The reflective skin of the edge of self could be thought of as being like a two-way mirror. Information falls onto the boundary of the sensorium and is reflected back as we describe and interact with the universe at large. What others see of our selves is merely our personal reflection of the universe according to us, but on the other hand we probably think of our actual selves as homunculi sitting inside the spherical two-way mirror, observing but invisible to the outside world.

But isn't this just an illusion? As discussed before there are no homunculi; postulating their existence to explain consciousness invokes recursion as we then have to imagine the mechanism whereby the homunculus is sentient and so on... and any theory that invokes recursion or infinity probably has a flaw somewhere.

If anything our actual consciousness is simply the reflective surface itself of the boundary between us and the cosmos. We might say that consciousnesses are inverted baby universes, the reflection in the surface of the 4D mirrorball of everything else.

What's inside is unknowable and as unreachable as whatever it is that is outside the universe...

This rambling thought monologue is beginning to sound a little like something else. Black holes - objects once thought to be mere mathematical abstractions but now proved to actually exist - are infinitely dense objects surrounded by an event horizon, a skin surrounding a region forever cut off from the rest of the universe by the speed of light. Some think of them as the budding points for child universes. In this scenario all the space-time-energy-mass sucked in ultimately emerges Elsewhere as a new universe, another Big Bang.

Just as our universe may very well have started out as a black hole in another, older universe.

If all we are mentally is the reflection of all that's around us in the skin of our spacetime selves, this would imply that in a situation of total sensory deprivation we'd lose consciousness all together. This isn't actually what happens though; far from shutting down, the consciousness enters what could be described as a psychedelic experience.

This would imply that there is more to our consciousness than simply a heightened awareness of and reaction to the outside world. During these sensory deprivation experiments, one remains aware and conscious despite losing all sense of identity (something I once experienced myself not in a floatation tank but just in the middle of the night in bed). The sense of self and identity may therefore be seen as a function of the sensorium (and the memory, which is after all stored copies of earlier sensoria), but the nature of consciousness itself would seem to be something more than that.

This goes against all the recent materialist theory I've recently been reading (and on the whole agreeing with).

I am not comfortable with such anomalies and holes in my knowledge. There's nothing for it, I'm going to have to seek out and use a flotation tank and then report back on the experience.
borders boundaries consciousness cosmology death journal life physics