The Three Faces of Promotion

It is of course typical that when I write an entry making a big song and dance about how I am going to temporarily return the blog to its original purpose by writing about my short trip to the Edinburgh Fringe it mainly covers my journey up and then before I get the chance to write part two I get so distracted by space knockers that I have to write a blog in defence of the Mars Curiosity Rover.

And then do nothing for several days. 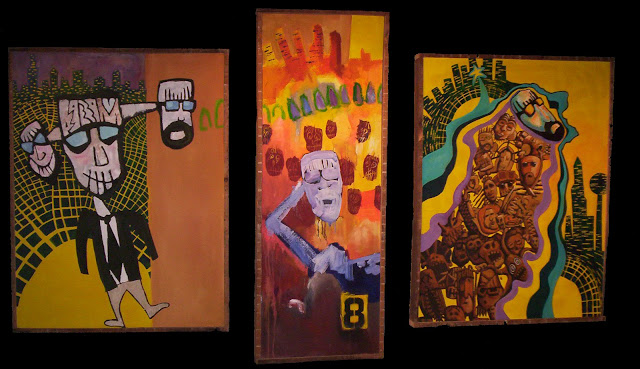 Of course it's not strictly true to say that I haven't been doing anything. I have been very busy. For a start, I have been writing, just not blog entries. And when not writing I have been commuting back and forth between Dolphinton and Edinburgh on the local buses. This means that I haven't been able to stay in town as late as I would have liked as the last bus is at 9.35pm.

Nevertheless I have managed to see a few good shows - some of the best being Bad Musical, Michael Legge: What a Shame and My Stepson Stole My Sonic Screwdriver all of which I would thoroughly recommend you go and see. However, I didn't see as much as I would have liked to or as much as I should have done.  That was the problem. Despite my earlier resolve, the temptation to just sit there soaking up the atmosphere and soaking up the beer was still very strong.

One thing you can't fail to notice during perambulations around the festivalised city are the posters. They're everywhere and when visiting Edinburgh outside August their absence makes the city look nude. Perhaps it's my imagination, but they seem to be getting bigger since I was last here and a lot of them have started using the same three expressions on the faces of the well-groomed and professionally photographed subjects.

There's the Personable Smile. The one says that its owner is a very reasonable and pleasant person who you could very probably introduce to your grandparents without worrying about whether they'd get on. Personable Smiler is bound to impress everyone.

Then there's the Mad Smile. A self-consciously wacky grin, often coupled with crossed eyes and an amusing prop. Mad Smiler comes across as someone your grandparents might be a bit wary of although there is always the suspicion that in real life the Mad Smiler is probably as straightforward as the rest of us.

And finally there is Exaggerated Worry Or Fear. An alarmed gurn, its wearer is usually looking off to one side of the picture at some imagined threat. Often they clutch an incongruous prop or are dressed in some kind of uniform.

For someone like me who has trouble recognising people sometimes (and therefore can unintentionally come across as being rude through no fault of my own) the prevalence of these similar poster expressions means that if I went to too many shows there would be a danger of them starting to blur into one.

And this is my excuse for not having been to as many shows as I should, although if I count the Gonzo Dog-Do Bar Band show last night I have actually been to at least one thing every day which isn't too shabby.

However as I am going back home in less than forty-eight hours I will very probably end up promising myself to go and see half the shows when they come to Brighton in October.