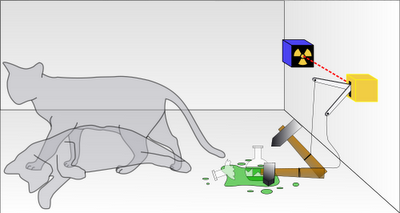 So, smelling is quantum. No really.

As mentioned in an earlier blog entry, it turns out that the underlying biological mechanism that allows us to smell relies on quantum tunnelling to get the job done. It seems to me that if one neurological mechanism - and quite an old one at that - uses the very structure of reality itself to function, then it's likely they all do. But what would the implications be if we discover that our very thoughts are subject to the new physics?

As is so often the case I have to put in a disclaimer; I Am Not A Scientist. I am someone interested in science; someone who, upon reading about the latest bleeding edges of physics in the quest for ultimate truth, starts performing thought experiments based on his very dim understanding of what he's just read.

So bear in mind that I may very well be talking rubbish. 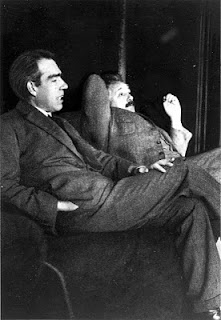 Don't slouch, Albert
I am not shocked by quantum theory. This is very probably because, as Niels Bohr said in the quote at the beginning of this entry, I don't understand it. No surprises there, I don't expect to understand it. It's a complex branch of physics that some of the finest minds in existence have dedicated their lives to studying; I can hardly expect to breeze in, read a couple of popular science books about cats in boxes and suddenly get it.

Mind you, it must be odd working in a quantum research laboratory. In order to hold down a job there one would assume that employees understand what they're doing. So if Bohr is right, and he won a Nobel Prize and used to wind Einstein up so he probably is, this means that they're all shocked. All the time. It's a wonder they get any work done; they must spend half the day sitting down and having a cup of hot sweet tea.

However, whilst I don't understand it, I get what some of it is trying to say, and it all seems a bit bonkers to me. It's my suspicion that when things don't make sense, when current theories are forced to jump though ridiculous hoops in order for us to keep believing in them (for example epicycles; see earlier blog entry about the detail in the devil) or when equations unexpectedly throw up infinities we're probably missing something and missing something big.

To me some of the absurdities proposed by quantum theory sound more like an artefact of not seeing something fundamental (a whole new field of physics?) rather than simply a case of "Ooh ain't it spooky down there on the quantum level!"

For example, poor old Schrödingers cat, in a quantum state of being both alive and dead until observed. I realise it's only a thought experiment, but is the cat really in both states until we look at it whereupon its wave function "collapses" into one of the states? I'm not so sure. The whole concept of the act of observing having an effect on the outcome seems a bit odd to me.

I don't object to the idea of measurement having an effect on something; that makes sense as often the tools used to measure something can affect it. But mere observation?

Suppose the cat box is glass topped and the scientist lies on the floor. At a predetermined time he stands up and peeps into the box. How can such peeping collapse the wave function? Nothing has changed except that some of the information flowing outwards from the cat is now being intercepted and interpreted. This seems to be implying that somehow parts of the universe "know" when a conscious mind is looking at them.

But isn't consciousness just an artefact of the mechanics of the brain? So say the materialists. How can a collection of turbo-charged nervous tissue affect the reality of another bit of the universe? Suppose instead of peeping over the edge of the box, the scientist cuts off his twin brother's head (well it is a thought experiment), impales it on a pole and makes it look over the edge of the box like a ghastly glove puppet? As far as the quantum superpositioned cat is concerned this should be no different from a live head peeping over the edge of the box and yet according to quantum theory, this won't collapse the wave function.
Or suppose the scientist sets up his experiment and then flies to the Moon where he trains a very powerful telescope on the glass-topped box (which he has placed on the laboratory's roof). At a predetermined time he looks through the telescope. This collapses the cat's wave function and it's now observed to be alive or dead. But hang on. It takes light one and a half seconds to get from the Earth to the Moon, so by the time he's observing the cat's state it's already been in that state for a second and a half. So in order for his observation to have collapsed the wave function, news of it has to travel backwards in time, which everyone says isn't allowed.

I am not a scientist, but even I can tell something's missing.

Just as Relativity meant that Classical Physics had to be rethought, and subsequently Quantum Physics meant that Relativity didn't have all the answers, one can't help getting the impression that there's another discipline waiting in the wings ready to topple the Quantum King from his throne.

It may be the Many Worlds Theory, as already discussed in an earlier blog entry about traveling back in time to shoot your grandfather. In this theory there isn't just one universe, but a multitude (or perhaps one multiverse with an infinite ways of looking at it). It's probably best not to think of these universes as stacked together like pages in a book, splitting in two everytime someone somewhere decides to toss a coin, but more as a Whole Sort Of General Mish-Mash (as described by Douglas Adams) or perhaps as a a Big Ball of Wibbly-Wobbly, Timey-Wimey... Stuff.

The practical upshot of this though is that on a quantum level particles and energy are weaving in and out of what we think of as "our" universe, causing them to appear to behave like waves (sometimes) and do bizarre things like "interfering" with each other. What we're really seeing may be the blurred edges of the nearest other universes which become visible when we get down to the very very small.

And our cat? It's still both alive and dead, but these states don't have to co-exist in the same universe with all the associated problems that this may cause. They're parallels, and when the scientist observes the cat's fate he's merely finding out whether he's ended up in the universe where he's a cat murderer or not.

So what does this all mean if it's not just our noses but in fact the whole of our nervous systems that are quantum? If our thoughts and consciousness are due to the electrical activity of the brain, and this activity takes pace on a quantum level, it could be that we share what we think of as our minds with our doppelgängers in the universes next door. All doing slightly different things from us.

We're all multiple personalities, but every one of those personalities is us.
brain consciousness douglas adams journal many worlds interpretation mind parallel universe quantum theory