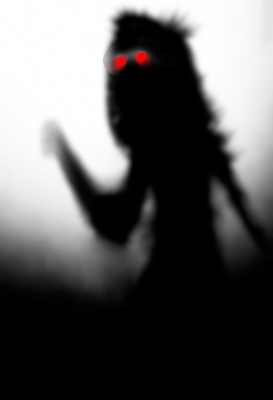 It has been of mild annoyance to me recently that I seem to have been having quite interesting dreams and yet before I can get to a keyboard to record them, they evaporate leaving only a sense of their ambience - if I'm lucky a pleasant and exciting one.

I have already discussed on this blog why dreams might have to evaporate, but of course that isn't to say that they always do. Sometimes they stick. And sometimes the ones that stick are the nightmares.

I have already covered the recurring dreams I used to have about the creatures called Dobods. But one foe appeared only once in my dreams back when I was five or six and I still remember it to this day.

It only ever glimpsed in shadow, cast around a corner onto a white wall. It was called Madam. This wasn't Madam as in Sir or but something more closely related to madness.  It wasn't male or female, just an it, a primeval evil force, something you wouldn't have thought a six year old capable of imagining.  As far as I can recall for most of the dream I was with some people and we were hiding in a  room, silent in terror lest Madam appear.

At one point we forgot its name and this seemed to rob it of its power.  We sat around trying out different words, but it just wouldn't come back to us.

"Mowgli?" one grown up with an American accent wondered, "Maxi?" But it eluded us and we felt calmer.

Then I remembered and blurted out "Madam!" before I could stop myself. The fear came crashing back  in on us and there on the wall was its shadow, shaggy head, one arm outstretched.

I woke with a start.

At the time I shared a bedroom with my sister, bunk beds. We whispered to each other and I told her all about the dream I'd just had. I doubt it meant very much to her, but just having someone to tell it to made me feel better and I fell asleep again.

The next evening I had forgotten all about it. Quite apart from anything else a day as a child lasts sich a long time that my experiences in the nightmare realm the previous night were now a distant memory. We were in a car, heading back home through the London night.   From where we sat in the back my sister and I watched as headlamps and streetlights cast swiftly moving shapes on the interior surfaces.  At one point we pulled over and our dad got out to pop into a shop. While we waited I made shadows on the car's ceiling with my hand, just messing about.

"Is that Madam's hand?" my sister asked innocently.

With a crashing chord of terror the hair stood up on the back of my neck as I remembered. And the worse thing about remembering at this time of day, when it was already dark and bedtime was now not that far away, was that the dreams were there waiting for me. I could see them. Waiting in my bedroom just over the horizon of consciousness.